The History of the Ancient Beard

An OG cradle of civilization, ancient Mesopotamia is famous for some grand accomplishments such as enacting Hammurabi’s code, developing an advanced irrigation scheme, and rocking some of the most badass beards of all time! We know facial hair was an important aspect in male Mesopotamian society thanks to the art and statues they left behind. In all of them, the beard plays a highly prominent role as they are always long, luscious, and well-groomed. Furthermore, they are meticulously ornate and arranged in three hanging tiers. Due to how beards have been highlighted across ancient Mesopotamian culture, it is believed that they were a sign of power and status. All of their deities are also shown with thick, flowing facial hair with even some high-powered women sporting false beards. The mesopotamians were known to have utilized tongs and curlers to style their beards and make elaborate designs. This, however, would take its toll on their hair which is why the Mesopotamians pioneered beard oils using sesame seed oil. The oil moisturizes the vital areas of beard growth, kills lice, and repairs damage dealt by the aforementioned utensils. Not content with volume and basic styling, the ancient Mesopotamians were also known to have employed the use of henna, braids of gold, and ribbon to further fashion their beards. 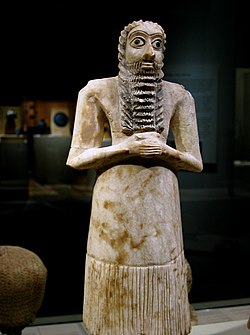 The collapse of the Mesopotamian city-state structure was succeeded by the rise of the Ancient Egyptian empire whose rulers, perhaps as a rejection of their ancestors, were not as enamored by beards. The Egyptians still featured facial hair but it was often artificial and only worn by kings. Regular society was relatively clean-shaven and unconcerned with beard styles. This beard-free look is believed to have been copied and imported by the Ancient Greeks after they conquered and annexed Egypt. In any case, it is indisputable that the Mesopotamians have earned their place in the beard hall of fame. They established the use of beard oils, intricately styled their facial hair, and ensured future generations would understand the value and purpose a beard can carry.

Learn more about what you can do today to stimulate your beard growth and live your vibe.